I've been feeling compelled lately to write down some thoughts about the boys as they are right now. I'm not sure how regular it's going to be or how much sense it's going to make but this is what our boys are up to right now.

Steven is always our crazy man. He is curious, energetic, unpredictable and FUN. It always amazes me the depths of Steven's personality. He can be extremely outgoing. We went to the zoo this weekend and there was a worker there checking up on one of the animals and Steven walked right up to her and asked what she was doing, does she work here, etc. etc. I say all the time that he doesn't know a stranger, everyone is a potential friend. Also, he is a performer! He loves to sing and dance and be the center of attention. We were having dinner recently at Steve's parents with about 10 people sitting around the table and having several conversations. Out of nowhere Steven jumps up on his chair and starts singing and preforming. But there are also times where Steven can be really shy. When we get into a new situation where there's a lot of people or its an unfamiliar place he will cling to me, not want to talk to anyone, etc. It's so funny!


He has a lot of dichotomy to his personality these days. Another example is that he is equal parts independent and dependent, usually depending on his mood that day. We will hear all the time "I can do it on my own." There are times when he will go into his room and come out fully dressed with shirt, pants, socks, shoes, etc. often without us even prompting him. But sometimes, he will demand we dress him. Which is really frustrating because we know he can do it on his own and aren't really sure why he wants us to do it.

Another split is in his interests. Steven just loves everything! He loves to try new things, check things out, etc. He's always been rough and tumble liking to wrestle, run around, play guns/pirates/bad guys, etc. But he also really loves to pick out his outfits, have his toenails painted, talk about my outfits and try on my jewelry, etc. He likes to watch super hero shoes and barbie shows. He just loves it all! 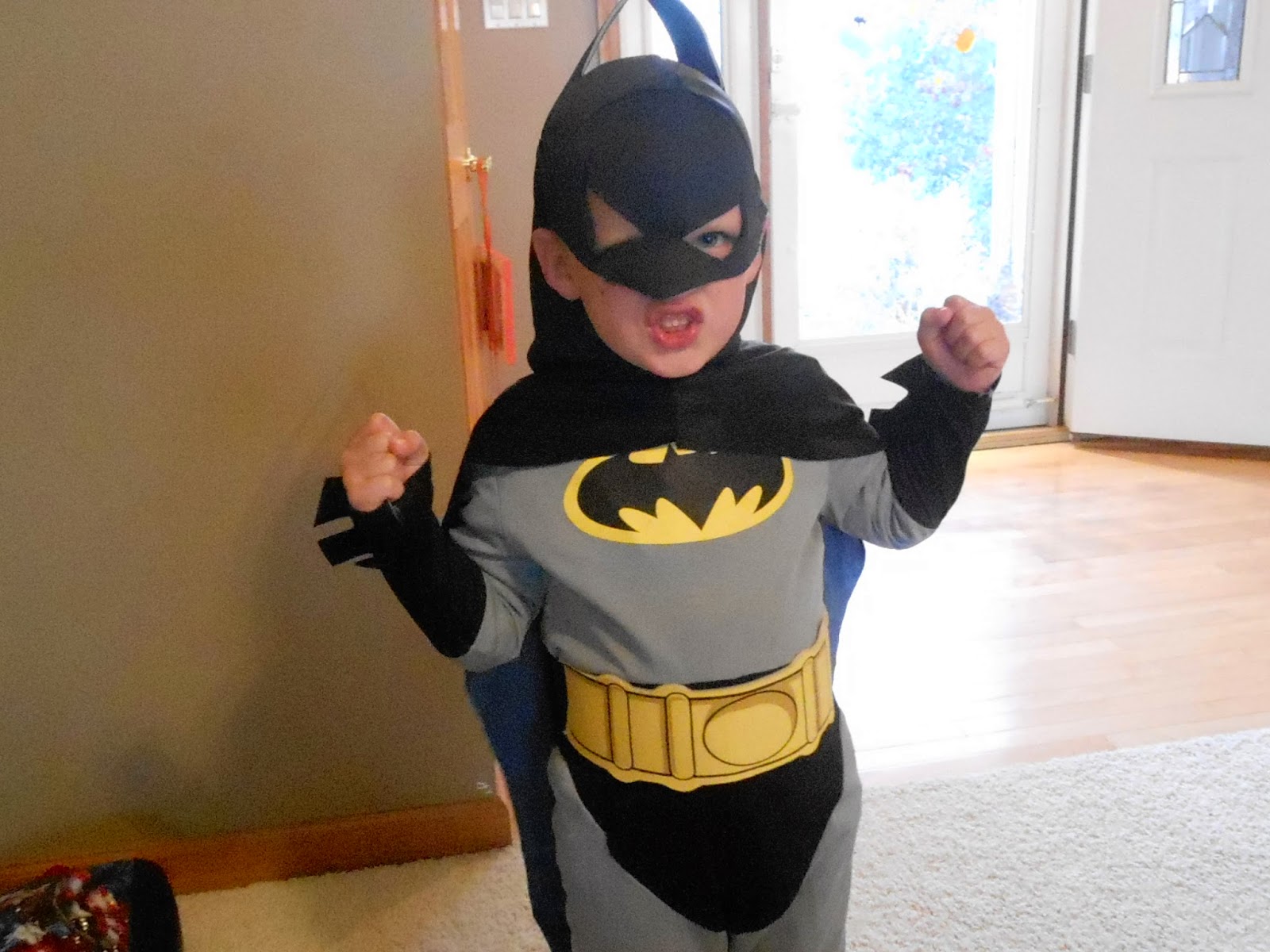 Steven's temperament is also definitely variable depending on his mood. He can be the most cuddly, loving boy. He will randomly give kisses and hugs, say "I love you mommy" "You're my sweetie.", etc. He gets upset if I start to leave the house without a hug and kiss. Those things just melt my heart when he does them. But then also he can be stubborn, inconsiderate, opinionated and just mean when he wants to be. He will definitely tell you if you've broken a rule. He's taken to yelling at us when he doesn't get his way, which I'm really trying to work hard on extinguishing. Sometimes he digs his heals in on the strangest things, (I think to try to assert some kind of control). When we don't give in or bend to his will or whatever request he has at that moment he can get really upset.

I will say that it seems that we have turned a corner in regards to Steven's behavior. We are able to talk to him a lot more about good choices to make and better ways to behave. Timeouts and epic meltdowns have greatly decreased at our house, which is a big step in the right direction. I don't know if its just a product of his age and gaining more knowledge about controlling his emotions or if we are actually doing pretty well at parenting right now (maybe its both :). 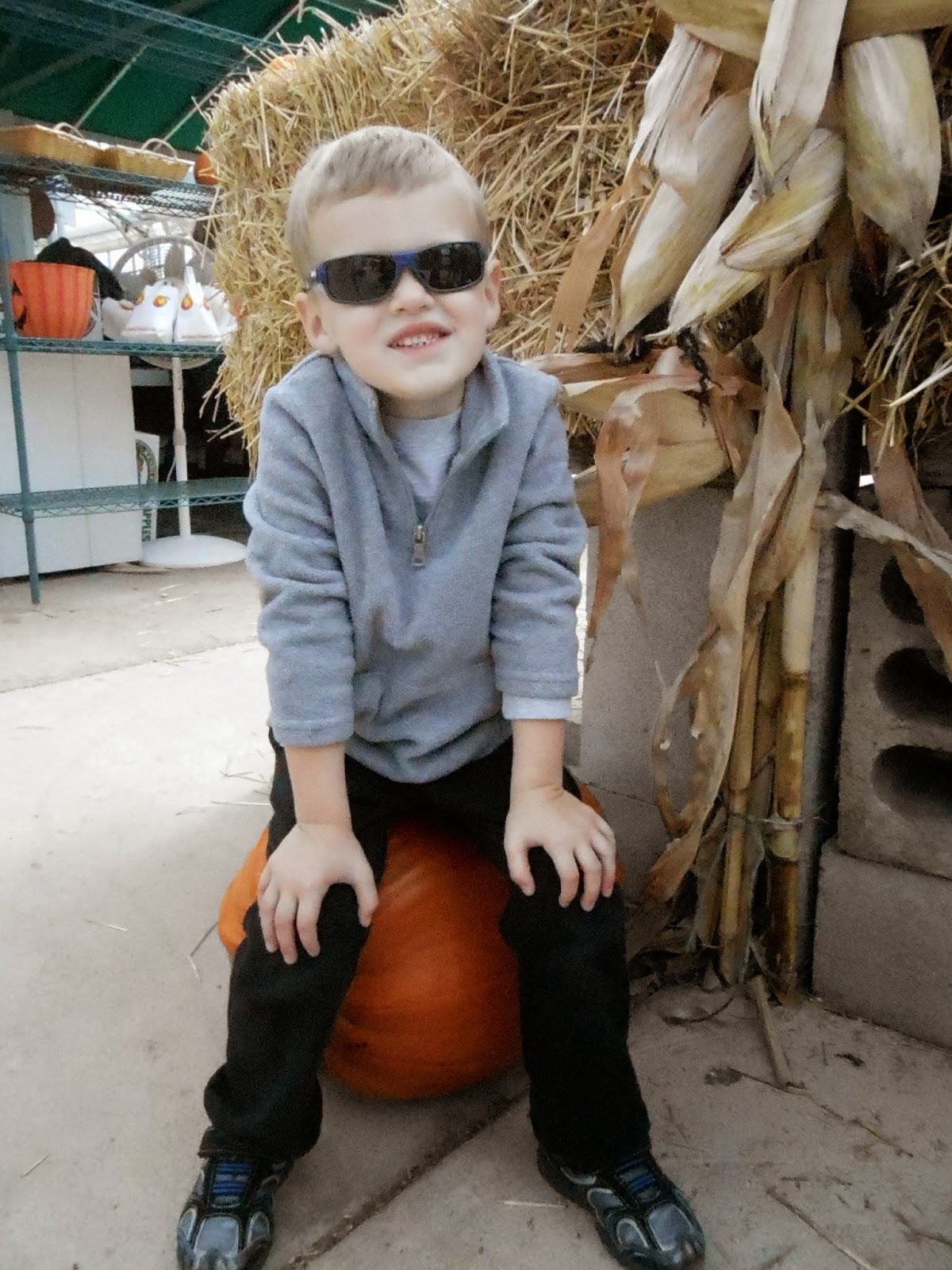 My biggest joy lately has been seeing Steven and Logan developing a relationship. Steven has been turning into a protective big brother and I LOVE it. If anyone poses a threat to his brother, Steven is right there on the scene to tell them to back off. But at the same time, Steven will enforce his own brand of justice on Logan if he breaks a rule. Sort of a "nobody can hurt my brother but me" relationship. Steven is a great helper, though. He will go get a binky, pick up Logan's cup, put crackers on the table for him, etc. I really love it. 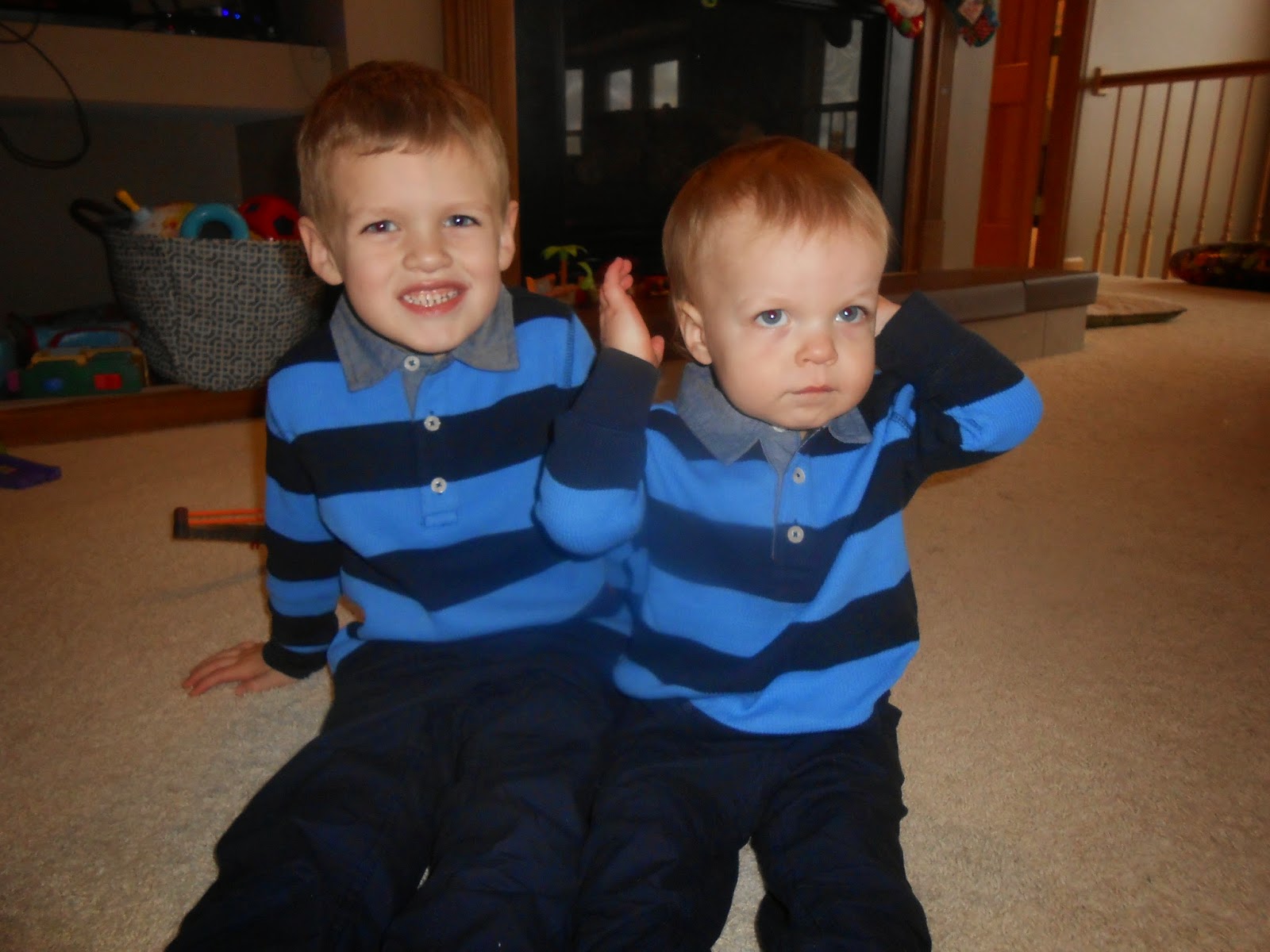 In great contrast to his brother, Logan has always been a cool customer. He is a really chill personality, mostly playing it cool, going with the flow. He spends a lot of time observing his crazy brother's behavior (I like to say he watches the Steven show). Even when he falls down, Logan rarely cries unless it's a really bad injury. He usually just gets up and keeps on going (probably trying to keep up with his big brother). Even when kids take toys from him he usually just stares at them and walks away to play with something else. It's crazy! At that age, Steven would absolutely freak out if someone took a toy of his. 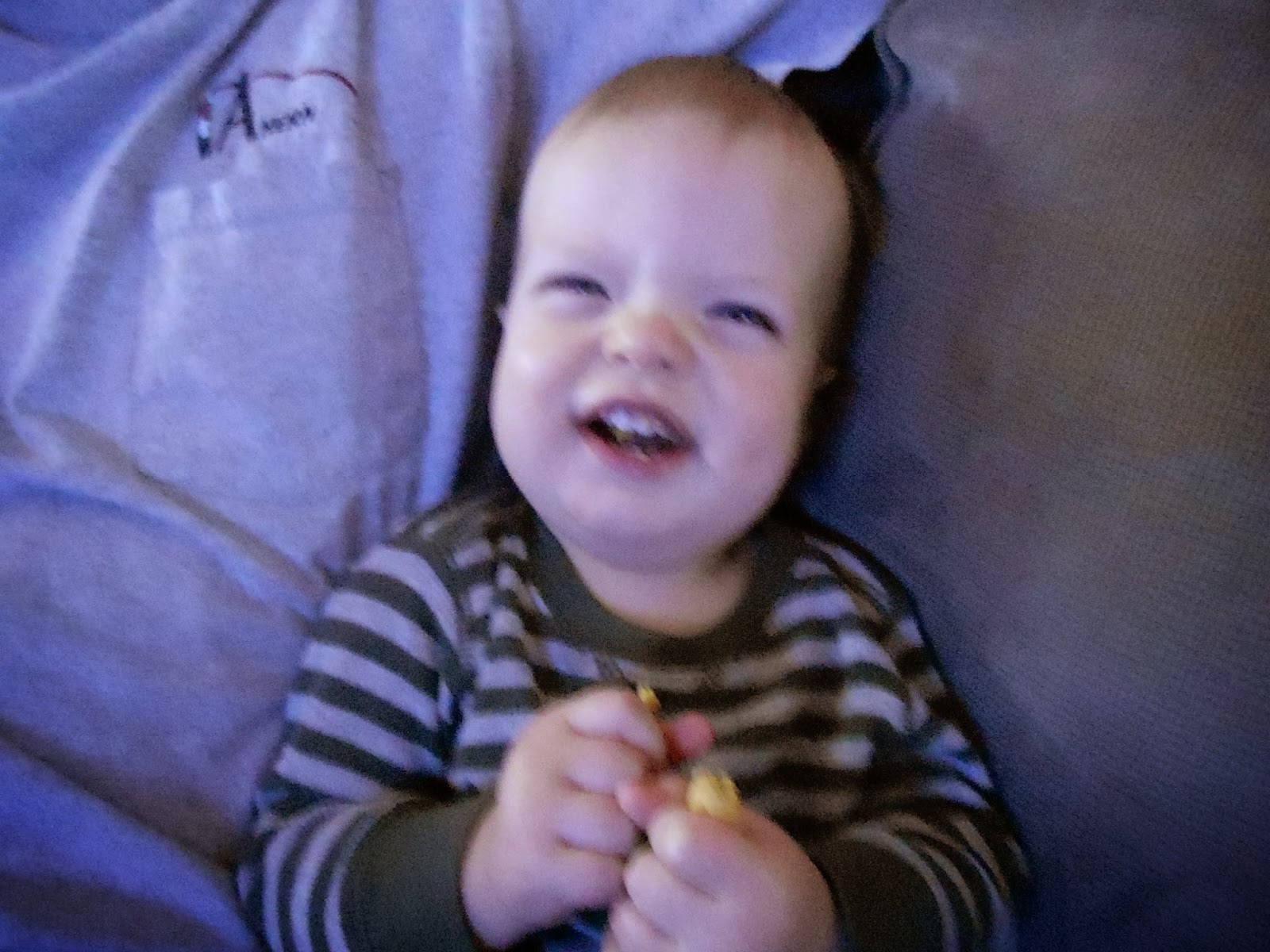 Speaking of falling down though, Logan has been our accident-prone boy. He has been to the ER 3 times in his short life. Recently he was playing and just feel down and hit his face just the right way on the corner of a toy and got a bad cut. Luckily he didn't require stitches but geez man! That's a lot of ER trips for 1 year old boy! Especially one who is so low maintenance usually.

There are 3 things that get Logan going though and they are wanting his binky, being hungry and being tired. If any of these occur, Logan can get really, really fussy and whiny. We usually know its gotta be one of those 3 things otherwise he wouldn't be crying! Speaking of his binky, man he is really attached to it! That is so weird for us because Steven couldn't care less about his binky by this age. But Logan would have it 100% of the time if we let him. We have cut it down to nighttime and in the car but I am dreading cutting it out completely. It's gonna be tough. 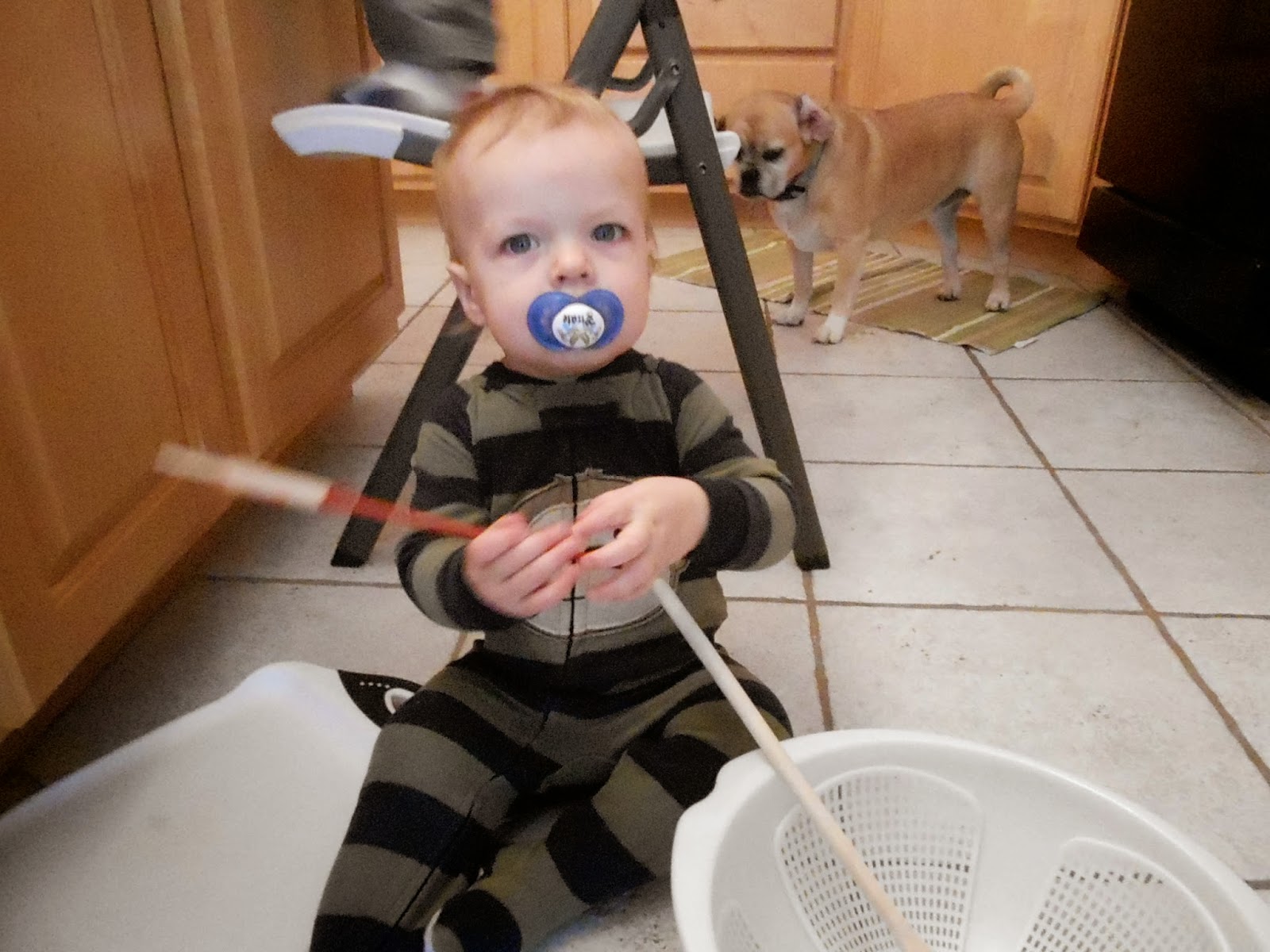 Overall Logan is a really awesome kid. He is pretty good at putting himself to sleep at night and for naps. He is mostly low maintenance, doesn't require a whole lot of rocking, can self-soothe, etc. He loves to be silly. He will try on hats when we play and give this little grin and its just the cutest. He loves to play peek-a-boo. He loves to dance. Anytime there's any  music on a toy, radio, etc Logan is dancing. I love it! He has been climbing on everything and its nerve wracking, omg! But I think that's really normal for his age. He has the best belly laugh when you tickle him. It's the sweetest. I love to hear him laugh! He loves to get out alllll the cups in our cabinet and scatter them about. He loves to pick bottles and boxes out of the recycle bin and play with them. Silly boy! 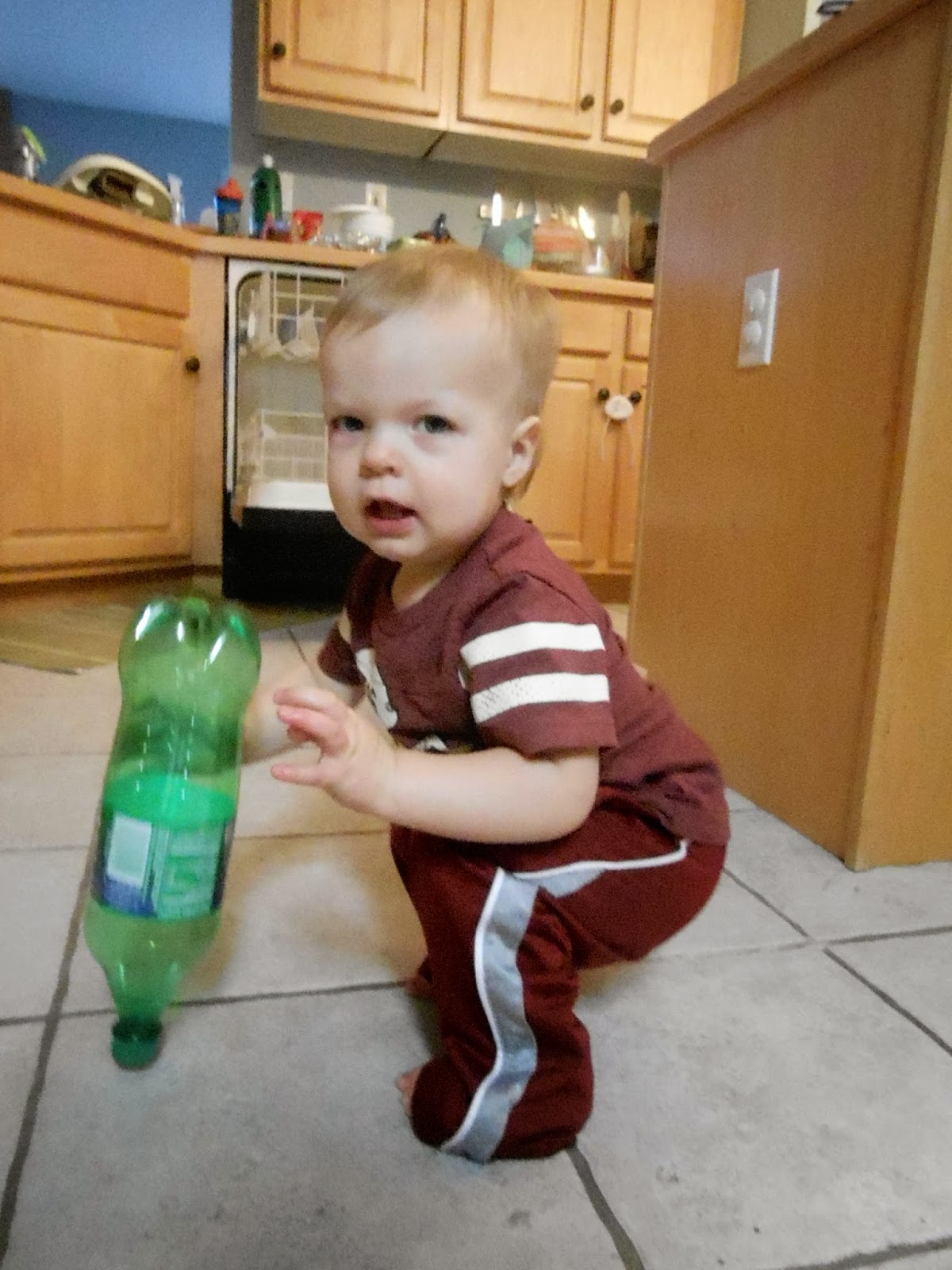 I really am enjoying seeing Logan grow into his own personality. I am also loving watching him learn about his environment and master new skills. He's at a really fun age right now!

So those are my boys at this age! Like I said not sure how frequent these posts will be but I wanted to make sure to capture how fun life is right now with those two loons.

May was a super fun month for us. It's so nice that we are in Spring and Summer and can do more things outside with the boys now. May is a big month of events for our family, first was Steven's birthday party and of course our trip to Chicago and our 5 year anniversary, Memorial Day, Mother's day and my mom's birthday, whew!

We had such a great time on our Chicago trip. I hope we get to go back sometime soon!
Some other fun stuff, Steve took Steven to an arena football game near us and they had a blast. He said he ran around like crazy but I think it was so neat that they could share that. I know Steve is eager to talk to Steven about sports and all of his other passions.

﻿
Steve also took Willow, Steven and a bunch of other kids to the Renaissance Faire. They had a great time, of course he only took one picture. A throne of swords I think this is?

﻿ I'm not sure if I mentioned in April or not but Steve started a new job. He now works at Graybar as a web developer. It's a lot closer to our house and he hopes to get the opportunity to program on new technologies. They seem to like him there and he likes it so far so that's good!

I also got a promotion recently which was awesome. I had been wanting to move up for a long time so this was great news! I'm still with Employee Education System at the VA but now I'm a Management Analyst. I actually moved to a new office on the 3rd floor of our building as well, so lots of changes for me at work this month!

Big news for Steven this month as well. We put together the bunk bed we got for him from Ikea. He LOVES it! Days after Steve got them up, he kept saying "Thank you for getting this bed for me!" It's so cute. At first he was kind of shaky on the ladder but he was determined to get it down and after only a few days of practicing he can go up and down by himself. He is so proud of that and we are proud of him.

﻿
I had a lot of fun with my friend Jenn this month. We went to see the Chippendale's and it was awesome. We had a blast!
﻿

Jenn and I also took a painting class. It was through Wine and Canvas that we got on Groupon. We had a really good time! It was at a nice place called the Lakehouse, which seemed like they had a good menu. We should go eat there sometime. But we had fun. I'm not the best painter but I always have a good time trying. I stole this picture from their FB page! ha! 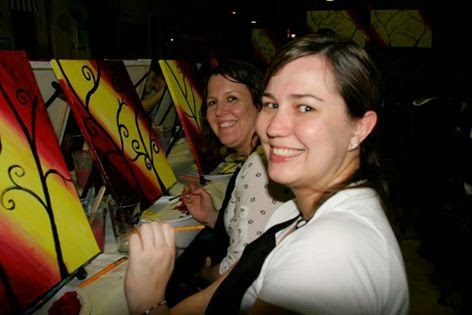 Steven had his 3 year doctor's checkup and I decided to take him for a little mommy time. I took off work one morning and we made a little half day of it. He was really excited to get to spend time with me. I love him so much!
We went to breakfast. I let him choose and he picked McDonalds. Fine by me. They had spider man toys there and OMG he lost it. He is so obsessed with super heroes lately. It was pretty cute.
We also had my side of the family over for a Memorial Day BBQ. It was really great that they could make it, Cindy even came from Kansas. Kris and Zach brought Miss Emelia and it was so nice to be able to see her. She's only about a month older than Logan so they are so cute together. Steven was psyched for babies! ha ha


﻿ So lots and lots of fun stuff for us this May. It was a busy month!

Susan
Welcome to my blog. Thanks for stopping by! I am mommy to 2 beautiful boys, Steven and Logan. I am a wife to my wonderful husband, Steve. I am a doggy mommy to 3 crazy dogs Zeus, Zora and Freckles. This blog is a journey just like our crazy life. I hope you enjoy!